Cellulite – the mere mention of the word can bring about a highly negative reaction in some women. There are many creams, body wraps and treatments that are claimed to bring about reduction in or an elimination of cellulite, yet much of the money that is spent on cellulite is simply wasted as there is little evidence that they work. Some people claim that most of the research that is reported is paid for by companies with an interest in promoting favourable aspects of results and is not truly scientifically independent.

There are also many massage therapists who promote that their massage techniques can bring about a reduction in cellulite and they claim that there are studies that support that cellulite can be smoothed and reduced by a cellulite massage.

What is Cellulite?
Cellulite is not an actual disease but a condition of bulging fat cells that lead to an appearance of bumpy looking fat on the skin. In some circumstances the fat cells expand to the point that they result in the bending of collagen fibres surrounding them which gives rise to a puckered skin appearance. There are still some arguments about how the fat cells originate; some say that it is the result of a build up of metabolic waste due to ineffective lymphatic drainage and/or poor circulation, others claim that it is more environmental (tight clothing for example) or diet related. However, aspects that are generally agreed upon are that the incidence of cellulite is hereditary and the thickness/configuration of the dermis plays a significant role. For example, men who typically have a cross-hatch type pattern of connective tissue beneath the dermis, are much less likely to be affected with cellulite.

Treatments for Cellulite
Exercise and Diet
Although there are so many health reasons for having a good diet with lots of fresh and natural foods along with regular exercise, unfortunately these will not “cure” cellulite. If you lose weight, then there may be a reduction in the levels of fat that occurs as cellulite but for most women, genetics are the overriding factor and the cellulite appearance can be considered as being predetermined by her genes.

Creams
Probably as much money is spent on creams as any other treatments but there is little evidence that they offer long term benefits. The proposition that a topically applied cream will penetrate the skin and act on the fat deposits, is hard to contemplate particularly as the skin is normally considered as a great barrier.

Some people do feel that regular application of creams does reduce the appearance of cellulite although it is probably the case that the cheaper creams are as good as the expensive creams that contain wild and exotic ingredients. This is particularly relevant if it is possibly the mere act of massaging the cellulite that may be responsible for the transient improvement in appearance.

Endermologie
For women who have spent time and money on cellulite cures, then the phrase Endermologie will be familiar to them. There are many clinics offering Sydney Endermologie or Lipomassage or the like. Endermologie is claimed to work by suctioning the skin with a vacuum and then applying a type of deep tissue massage using a set of rollers.

This type of process which can break up adhesions and fibrous bands, can improve the appearance of the skin for some women. However, the effects are not permanent and the cost of regular sessions can mount up very quickly.

Cellulite Massage
Whilst massage therapy has numerous benefits for the body and the mind, there are some therapists who claim that their massage will bring about improvements with respect to cellulite. For example, they wildly claim that deep tissue massage can break up the fat deposits and eliminate toxins. Lymphatic drainage may assist in removing oedema and accumulated fluid in cellulite affected areas but the relationship between fluid elimination and reduction in cellulite has never been proven.

Other Treatments
There are many other devices that are available with differing degrees of success and if you are interested in any of these, then it is a good idea to spend a little time doing research before you spend your money. And it is always good to be sceptical about suppliers’ claims.

One treatment that has been approved by the FDA that may offer some benefits is Vela Smooth which combines Bi-Polar Radio Frequency, infrared light energies, plus negative pressure and tissue manipulation to smooth the skin. Again though if you read independent online reviews then some women have claimed success whereas others have felt that they have wasted money and had their raised expectations dashed.

If you are thinking of trying a treatment, be it a cream, a machine or for sessions of lymphatic drainage massage for reducing your cellulite then it is advisable to shop around and do your research beforehand and always be wary of pre-paying large sums of money for treatments without guarantees of success.

You may be surprised if you were told that the hardest working joint in the body is the jaw or the temporomandibular joint (TMJ). It is virtually constantly working when talking, chewing, grinding and clenching and there are estimates that it moves more than a couple of thousand times every day. It is no surprise then that some of the muscles used to move the joint can become a little overworked and sore.
Often the result can be what is referred to as TMJ dysfunction which can manifest itself in a number of different ways. These include

The outcome is often that the TMJ dysfunction sufferer has poor quality sleep, is constantly in pain or discomfort and a general degradation of their quality of life.
It is not uncommon that these problems can be related to trigger points in the muscles that move the jaw and, although there are a number that can be affected including the masseter and the temporalis, one of the main culprits is often the pterygoid muscles. The good news is though that it is relatively easy to massage these muscles yourself so long as you know where to work.

The origin of the term pterygoid is Greek and the root of the word, pter-, refers to wing like (as in pterodactal) which is considered to reflect the shape of the muscles.

The group consists of the medial and lateral pterygoids each of which have their own recognised trigger point referral pattern.

Trigger Points and Self-Massage for Medial Pterygoid
If there are trigger points present in the medial pterygoids then the person will often have pain in the TMJ and also around the ear. It can also be difficult to swallow with pain referred to the back of the mouth. If you have restrictions in how far you can open your mouth then there is likelihood that you will have trigger points in this muscle, normally present on both sides of the head.

In order to self-massage the trigger points then you simply press up on the inside of the lower edge of the jaw using your thumb. As with any massage, then it is advisable to go gently at first as often the jaw can be extremely sensitive at these points.
The most effective way to reach the upper fibres of the medial pterygoid is through the mouth. With clean hands, reach into the very back of the mouth beyond the final molar. Work on the muscle just beyond the bony edge of the jaw (open and close the mouth to locate the muscle if required). 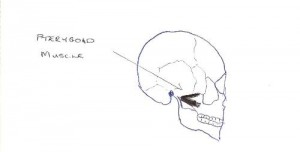 Trigger Points and Self-Massage for Lateral Pterygoid
This muscle is considered by many to be the leading culprit for pain and TMJ dysfunction. For example, if you have clicking and discomfort on opening and closing the mouth then you may have trigger points in the lateral pterygoid. Constant tension in these muscles can lead to the jaw being disarticulated.
To locate this muscle, then commence just in front of the ear on the cheekbone. Press on the underside of the cheekbone whilst opening and closing your mouth. A couple of centimetres from the ear you will often hit pay dirt with a tight tender band going up under the cheek bone. This is the lateral pterygoid and gently massage this muscle until the pain and tension has reduced.

Any time you massage trigger points in muscle groups it is a good idea to stretch them out afterwards to enhance the relaxation of the muscle. One recommended stretch for these muscles is to open your mouth against resistance by placing your hand under your chin while you slowly open the mouth against the resistance.

Often you will need to repeat this self-massaging a couple of times a day for a number of days to completely eliminate the trigger points in the group. If you are a TMJ dysfunction sufferer though, the time taken to do this will be well worth the effort as the pain relief can be significant.

More info on pterygoid trigger point massage is available on the video below.